Skip to content
The events that set climate change in motion occurred decades ago. How do we analyze the past and factor in the variable of chance when trying to predict future climate and weather events?

The events that set climate change in motion occurred decades ago. How do we analyze the past and factor in the variable of chance when trying to predict future climate and weather events?

Many concepts in science are variations on the butterfly effect – the idea that small changes can have large consequences over time, such as the flapping wings of a butterfly could lead to a hurricane weeks later. Butterfly effects are commonly discussed as they relate to climate change, but the concept is ubiquitous. Developmental Origins of Health and Disease (DOHaD), the topic of my first blog entry, is a key example. DOHaD posits that small events in infancy can radically change the trajectory of our health decades later as adults.

The “butterfly effect” concept comes from a 1952 Ray Bradbury short story called “A Sound of Thunder” in which time travel is possible, and a company emerges that sells safaris to the past to hunt dinosaurs. The company has strict protocols – scout teams are sent to identify dinosaurs that are about to die anyway in order to prevent any alteration of our current timeline that would result from their deaths. Hunters must agree to stick solely to the marked path and touch nothing on penalty of death, but one hunter strays and accidentally kills a butterfly.

Upon returning to the present, things begin to change: he can no longer understand spoken English, and people behave with customs that are strange to him. The seemingly inconsequential death of a butterfly a million years in the past set into motion a divergent trajectory. At the end of the book the hunter hears a sound of thunder – the gunfire from his safari guide that is his punishment for killing the butterfly and altering the course of history.

In another work of science fiction titled Foundation, the author Isaac Asimov takes on the idea that we can predict butterfly effects.  A seven novel series, Asimov’s Foundation describes a new science called Psychohistory. Psychohistory cannot predict the future of an individual person, but when data are applied to large groups of people, psychohistory predicts future events with a high degree of accuracy. Crunching big data, the novel’s hero Hari Seldon, predicts the end of the galactic empire, along with a 10,000 year cycle of war and chaos before the galaxy returns to a functional, unified society.

This brings me to Monty Hall, the original host of the Let’s Make a Deal gameshow. In 1990, Marilyn vos Savant, a magazine columnist listed in the Guinness Book of World Records for having the highest IQ test score ever recorded, presented the “Monty Hall Problem.” A reader posed her a question: “Suppose you’re on a game show, and you’re given the choice of three doors. Behind one door is a car, behind the others, goats. You pick door #1, and the host, who knows what’s behind the doors, opens #3, which has a goat. He says to you, ‘Do you want to pick door #2?’ Is it to your advantage to switch your choice of doors?”

Her response, while correct, was hotly contested, including by economists and mathematicians.

So why isn’t the probability 1 in 2 with regards to switching? There are only 2 doors left and the car is behind one of them. Consider these important facts. Monty Hall intervenes in this problem after you make your pick, and his pick is not random—he will avoid the door with the car whether you picked it or not. When you made the initial choice your chance of picking the car was 1/3 and the chance of being wrong was 2/3. Your odds are unchanged by Monty Hall’s nonrandom pick—they remain 1 out of 3 for being right and 2/3 for being wrong. But there is now only 1 door left. This means that the probability of that remaining door having the car is now 2 out of 3. Playing the prediction odds would mean switching doors. 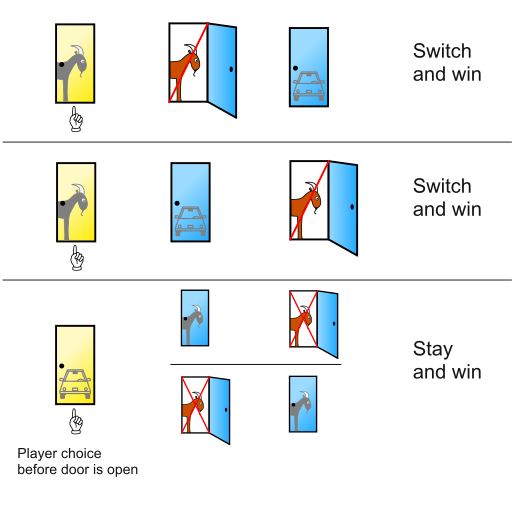 The Monty Hall problem illustrates that probability is impacted by random chance (the door you pick) and non-random events (the door Monty opens). Predicting the future requires modeling complex data correctly, understanding feedback loops, and factoring in chance events. Random and non-random events drive what happens in prediction models and in scientific experiments.

In fact, research doesn’t really predict the future. Research predicts the past because we create our models based on experiments and observations that already happened. We assume the same events will occur in the future under the same conditions and forget that probability doesn’t apply to the past. The probability that I will be born in September is not 1/12—it is 1—because it already happened.

Now back to climate change. What we understand about climate change comes from looking back on weather patterns. Perhaps the main fallacy in Asimov’s Psychohistory is that it could predict long term outcomes—years in advance. Because a greater number of chance events will occur with an increasing passage of time, we are much better at predicting the near future (will it snow tomorrow) than predicting the more distant future (will it snow 100 years from tomorrow).

Edward Lorenz, a meteorologist and the father of Chaos theory described it this way-

“Two states differing by imperceptible amounts may eventually evolve into two considerably different states … If, then, there is any error in observing the present state—and in any real system such errors seem inevitable—an acceptable prediction of an instantaneous state in the distant future may well be impossible….In view of the inevitable inaccuracy and incompleteness of weather observations, precise very-long-range forecasting would seem to be nonexistent.”

Chaos theory hypothesizes that if we understood all the relevant systems that lead from a butterfly to a hurricane and measured them without error, we could model the future hurricane. The mathematical laws would hold and with the correct initial conditional factors and correct models we could predict the long-term outcome. But Lorenz leaves out one important variable: chance. The same flapping butterfly wings that cause a hurricane in one timeline, may just cause a cool breeze in another. After all, sticking with the same door in the Monty Hall problem wins 1/3 of the time.

How expected is the unexpected?

We are still a long way from applying chaos theory because we don’t understand all the mathematical relationships, but also because we can’t factor in just how expected the unexpected really is. Asimov’s Psychohistory is a fictionalized form of applied chaos theory. Asimov appreciated the role of chance, as his novel included an anomaly: a character named the Mule with telepathic powers, whose unexpected existence hundreds of years after Hari Seldon died wrecked all his predictive equations.

The events that set climate change in motion occurred decades ago, and we are now seeing their long-term consequences. When it comes to predicting our future climate, the most important question may be whether climate change is driven by chaos theory, in which case “are we predicting a distant future” incorrectly? The old arguments that climate change is not happening too often rely on our inability to predict distant futures. Increasingly, with larger, more dangerous storms, droughts, floods, and temperature fluctuations, climate change appears to be a more predictable, near future. The butterfly effects happened years ago, the role of chance has run its course, and that sound of thunder generated from its wings is getting louder.

Read other entries in the Exposome Perspectives Blog